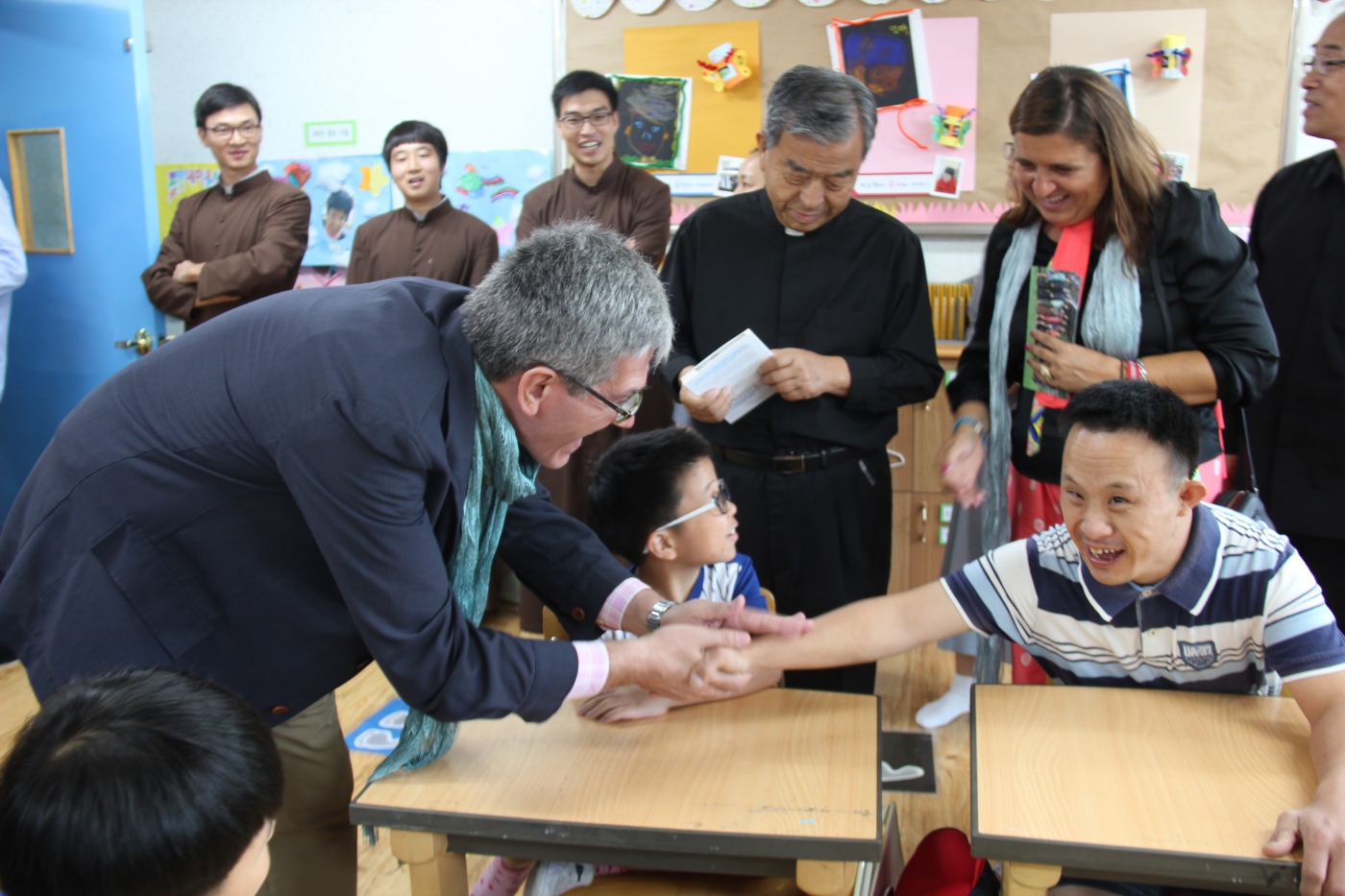 A few weeks ago I had the opportunity to spend time with people that, in certain environments, are not very well accepted.

I’ll start by speaking about my personal experience. At home, as you know, I had 18 children with my husband, 8 of whom were born with a disability: a congenital heart defect. We did the required checkups and both my husband and I were fine, but when we were married and had children, for some reason many of them had this heart problema. The oldest, Carmina, died at the age of 22; the second, Javi, died at a year and a half; and Montsita passed away after only 10 days. The others were able to receive treatment and surgeries to fix this heart defect, but Lolita is still waiting to have her very complicated open heart surgery. Doctors have been waiting for it to grow a Little more so that the surgery can be more successful. Thank God cardiology has come a long way since my first daughter was born.

When I was pregnant the doctors advised us to do an ultrasound to see if the next child was going to be born with some malformation of their heart. When we saw that something was wrong with our second child, they informed us that we were protected by the law and in Spain we could legally have an abortion… But we are nobody to decide who lives and who doesn’t. We decided to carry the baby to term and give birth to this son of ours so he and we could fight and fight.

All these circumstances, the continuous coming and going between hospitals and being so close to pain has strengthened us as a familyand above all has made us much more human. It helps us to place ourselves in the position of others who are hurting and to empathize more with them.

My husband Chema is one of 14 siblings. The oldest and the youngest of his siblings both have a child with Down Syndrome: Victoria and Jaime. The second is a bundle of joy that brings excited to everyone in the world with an enormous heart. Every Christmas we all meet at a large farm house (as we do not fit anywhere else) with almost 75 people and my children have the opportunity to spend time with all of their cousins and uncles and aunts for a few days. Their grandmother, Julita who is 90 years old, has all the grandkids put together a festival with the main protagonist always being Jaime. We wouldn’t be the same family without the gift of our cousins. They make us all better people, and they help us to grow while teaching us not to be so self-centered.

Because I’m an influencer on social media, I was invited to watch the movie Champions. We laughed and enjoyed it so much together. Throughout the movie there were several situations that we had also experienced as a family. The movie has such a human quality and we even cried when we heard that they had won the Goya award. I think that the movie helped to humanize Spain a little bit, because Jesus Vidal spoke from his heart and being grateful is always such a great practice.

I have a cousin that founded the Talita Foundation with his wife and another couple so that these children with diverse abilities could be enrolled in non-disabled schools. In my opinión, what they are trying to do really improves society as a whole. It helps my children so much to share a classroom with children that have disabilities, whether visual, Down Syndrome, or any other… It helps to humanize society which makes us all winners. These assocations also give support to parents, as they bring them together and thus share experiences and teach each other best practices. There are so many great projects and institutions in the world!

And now I’d like to go back to the beginning of my post, my travel to Korea.

On the day of my son’s graduation, at the end of the ceremony we went to see the protestant pastor Lee Jong-Rak, who for a few years has dedicated himself to taking in children whose mothers have decided not to abort, but who are unable to care for them. Some of these mothers are very young (in high school or junior high even), others just can’t raise a child with a disability of malformation, and still others just can’t afford to have a child… and then there are others that do so because their family has forced them to.

That very morning, they received a baby that was just three months old—it was so beautiful!

It is a small building located in a poorer neighborhood of Seoul called Jusarang Ecclesial Community (Love of God). On one side of the building there is a “baby box”, a metal box that opens on the outside and where there are some blankets and some heating. The mother can leave their child there to be picked up on the inside. They provide papers for them to write the child’s name and a bell where they can call to speak with Pastor Lee. Even if they don’t press the button, the pastor almost always emerges to ask to speak with them and they often accept. From there, they enter into a living room with a cot, some sofas and a bathroom in case they want to take a shower. The pastor told us that he no longer knows how many umbilical cords he has cut, because there are times that moms have children alone in a nearby forest, or at home or in a bathroom… and go directly to the baby box to drop off their child.

The first thing he does when a mother arrives with their child is to congratulate them for their strength in having the baby, because he knows very well that all of them have gone through hard times (the stories he tells are impressive, really). He also congratulates them for having let the child be born, because they could have aborted them. Then he offers his support in whatever they may need.

The pastor takes care of the babies there for a few days with help and then passes them to the government. There they do a medical check-up and send them to an orphanage where if they are lucky, they will be adopted. Adoption is another difficult topic in Korea which hasn’t really been fully accepted (they put a lot of importance on blood and surname…). The disabled children stay with the pastor at his special orphanage which is dedicated to what he calls, “Gifts of God.”

The baby that arrived that day was number 1,539. 1,539 lives! So exciting to realize how many lives this man has saved!

He told us that in China there are also several baby boxes and that one day they can sometimes receive up to 10 babies. One of these was forced to close because they couldn’t take in all the children that were coming, but it had to open shortly thereafter because mothers began leaving their babies in the street where the box used to be…

I have to tell you that I was so impressed and I loved seeing how many good people there are in the world, whatever religion they may ascribe to. For goodness in man magnifies that person and makes them happier.

Even from the US they came to visit him and recorded a documentary that has been seen by more than 12 million people. I confess that I didn’t know anything about BabyBox until my visit there.

And finally, I would like to tell you a little bit about Kkottongnae, located 150 km from Seoul. It is a “city” where they welcome all those people who are not accepted by society (Kkottongnae means “neighborhood of flowers” in Korean): whether homeless, disabled children, abandoned babies, people with malformations or intellectual deficiencies, and orphans… A community of brothers and sisters take care of them. They are in the middle of the forest and they even have a school for the children. They are picked up as babies some that are only a few days old, and brought to the town. Homeless people are washed, given food, a bed to sleep in, and are trained to build up their own life. But above all they are given back their dignity: we care about you, you are our brother and sister… Well, they refer to themselves as family caregivers, and they are. It’s very noticeable how much they love and care for these people.

They are even building a church with bricks that have inside them the ashes of family members. Their bodies will be the supporting structure of the church. When we went they asked me to give a talk, because one a month they meet with families that come from all over Korea. There were a few hundred people.

I also had the opportunity to feed Johan (whom I already knew from my previous visit to Korea), who has been bedridden for 33 years. On the pastoral visit of Pope Francis to Korea in 2014 he also visited him and has a photo with him sitting at the head of his bed. He promised the pope that he would pray for him every day and offer his illness for him.

I leave you here with a video that was made about our visit to Kkottongnae in the summer of 2016:

This post was originally published on comoserfelizconunodostreshijos.com on March 21st, 2019.