Finally, I’m able to write to you! What an amazing time we had together on “the Camino.” It was truly an adventure for everyone.

A few months ago I asked my older kids to organize and plan our family trip along the Camino de Santiago (Way of Saint James): what route we should take, how many kilometers we have to walk each day, where we can sleep, etc. Finally when the day we planned to leave arrived, guess what they had organized? Nothing. The only thing they decided on was that we should go along the northern route (in Cantabria and Asturias), and after each day of walking we could just bathe in the ocean…

Finally, without a single concrete plan, we left in two cars for Santander.  We parked one car in Santander and took the van as our courier to take our bags and food and also just in case the youngest kids got tired.

Every day we walked between 12 and 18 miles. With all of my kids ranging from Rafa at 8 years old to Perico at 24 years old we walked 4 to 6 hours a day. When we arrived at the hostels (many of which don’t allow reservations), we encountered more than a few difficulties finding beds for 16 people. Each bed cost us between $5 and $18 depending on the location, and many included breakfast. Some days we started walking without breakfast because we had to start early and in the middle of walking we’d stop somewhere to get a coffee, milk, bread, and maybe a few other small things. It was a real pilgrimage. When thinking about the beach that awaited us at each stop became too much to bear, we got more energy from singing songs and praying rosaries.

One of the older kids would drive the car most days to wherever we were planning to sleep that night. Lolita couldn’t walk every day because she has to have a surgery on her aorta soon and the doctor said she shouldn’t exhaust herself (please pray for her if you can).

During one of the stages, after about 4 hours of walking, we were all pretty exhausted and suddenly the village baker appeared in his van. We enjoyed the warm bread quite a bit and it gave us the energy we needed to continue. In our longest stage, which also had the most hills, we stumbled upon a van that was selling all sorts of things to some workers nearby. We were able to buy peaches and chocolate to give us some much-needed energy. It was definitely the work of our guardian angels. Most days, when we arrived at our destination we ate set menus for pilgrims in small restaurants along the route, and then sometimes we would take a little nap since we would usually wake up really early to avoid walking too much in the sun. Every day we slept in a different hostel for pilgrims, which was a real challenge: unloading backpacks, sleeping bags, towels, toothbrushes, sweaters… it was a miracle we didn’t lose anything!!

A few times along the way we encountered followers of mine on Instagram: they encourage us quite a bit, we took a lot of pictures, and one who was spending her summer in Comillas gave our whole group some delicious melon! Another family that knew we were walking through Asturias even invited all of us to have lunch at their home. Inviting 16 people to have lunch at your house is no small act of generosity!

Michael, one of Perico’s friends that he met in Hong Kong, also came with us for the pilgrimage. In this way we were able to have English classes incorporated into our trip as well. And we have him to thank for taking such great pictures!

After resting and showering, sometimes we went to visit the little villages that were scattered around us. We slept in Santillan del Mar, Comillas, San Vicente de la Barquera, and Llanes… 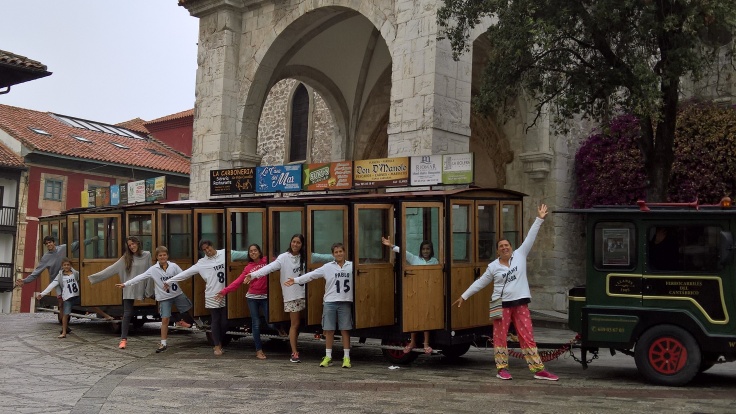 For a pilgrimage in the truest sense of the word, the Mass has to be incorporated. Normally, there was an 8 pm Mass each night. After Mass we ate a quick dinner that we would purchase in the supermarket, and then around 10 pm we would try to get some sleep since we had to wake up at sunrise each morning. We slept in rooms that usually had beds for around 14 people, with a bathroom and shower that was shared with everyone staying in the hostel. In this way, we had to learn how to be really quick!

Our week-long pilgrimage was filled with family time, conversation, overcoming difficulties, living together, and experiencing life without the comforts of home. We had no TV, just the beauty of nature and experiencing the majesty that is God’s creation… I recommend this trek to everyone with a family. Every year a progressive portion. It’s a cheap vacation that helps everyone grow together.